After a lazy week of doing a lot of nothing, it only seemed appropriate to drag my body to some place for the weekend. Also, that decision was reached after realizing that if I waited for too long, my money would most probably end without me having traveled somewhere. So I scouted for the events on for that weekend with the various traveling agencies. Most had hiking trips to some hill or mountain. And after that festival season, I’m far off from being fit. That plus the adrenaline rush guaranteed is how I ended up choosing zip lining as the event of the weekend. There was only one agency taking people for zip lining that specific weekend, so I didn’t have many options. Stejos tours and safari’s it would be.
As usual with many Kenyans, we ended up leaving Nairobi an hour later. And being Mercy, I arrived some minutes before the departure time that had been set and spent the next hour waiting. Almost all people knew each other here. They had traveled severally together. So after prayers, they began catching up. We made a quick stop over at westlands where we did some shopping. After an hour or so we were at Kimende. From there, the road is murram.
Five minutes in that road and the landscape changed. We could now clearly make out valleys and hills. The conversation now became about zip lining. All the anxiety that had been buried in, made its way out. ‘Hizo vitu zishaikatika?’ (Have those lines ever broken?) they started asking. The previous night, in the formed Watsapp group, people had been busy asking if one could zip line while tipsy. Now, faced with the reality that in the next few minutes, we would be zip lining across the air, no one seemed tipsy or drunk. Such kind of thoughts are enough to make one sober.
Upon arriving, we could hear screams of those already flying through the air. No one was in any particular hurry to get out of the vehicle. We gathered together as the tour operator,Steve, finalized with the Zip lining Fox staff. Steve then tried to get us to do some team building activities. For the few minutes we did, it was fun. But since most people knew each other, they saw no need of elongating the bonding session. They just wanted to get into the main activity of the day.

We were soon gathered for the training or instructions part. They even have a mini zip line for that. But before that, we all signed what some called ‘the death certificate’. A legal document claiming you went there of your own voluntary will and that should anything happen, it is purely on you. That was after reading a whole list of who is allowed to zip line, who isn’t, the dos and don’ts of zip lining and just in case of an emergency situation what you are supposed to do. And just before we could figure out how scary and serious zip lining could get, the training started. The trainer was a no nonsense man who stopped talking the moment he heard anyone mumbling. He explained to us how to zip line, how to brake if you are going too fast or how to get to the end if you are stuck. Since we already had been fitted with the ‘equipment’ for zip lining,we one by one did a practical example of what we were to do on the actual lines. By this time everyone just wanted to go and do the actual zip lining. Our lot was to do all the lines which are 6. 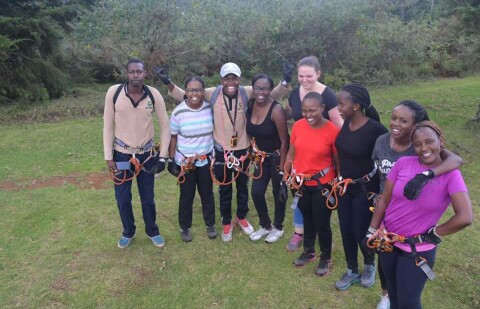 1st line-lets see how this goes.
That seemed to be the mantra for everyone as one by one people began zip lining. The anxious ones paved way for others to go first. Everyone seemed anxious and eager for their turn. I kept on wondering how it felt like to start moving. But I didn’t have to wait for long before discovering how. For the first few seconds in the air,my mind froze. You know that moment where you are taking it all in? The next moment, I was wondering about the pulley I was holding. It was making much noise and I could feel the friction happening between the mettalic line and the mettalic thing inside the pulley. But just before I could get over the fears of the friction wearing out my pulley and thus falling down, I looked down. And down seemed very far away, certainly I wouldn’t make it out alive if I fell. All these thoughts ran through my mind so fast that I did not notice my speed reducing and just around 10m to the end, I got stuck. Thank God,my mind remembered what we had been taught just in case you get stuck. You turn around and start pulling yourself from behind. I was so scared, but managed just fine. When I got off, I was not so sure, I wanted to do 5 more lines. 1 just seemed like enough torture. All other five people behind me got stuck as well. It consoled me to think that we are many in this struggle. Apparently the instructor had noticed that no one looked down. We didn’t even notice the scenery. We walked off to the second line. 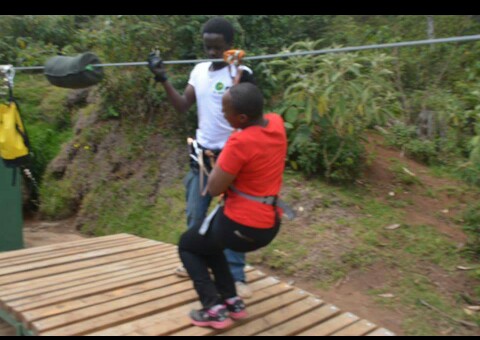 2nd line- still not gotten the hang of it.
For this one the instructor, told us to look at out right, there would be a beautiful waterfall down there. As I glided through this one, there were so many trees barely inches from my legs to the extent that I feared getting stuck. Then I remembered about the waterfall and started searching for it on my right. That saw me sway side to side which added to me being more anxious. I didn’t even know it as I reached the end point, but luckily I didn’t get stuck again and that boosted my confidence a lot. Apparently, the waterfall was a hoax to make us look down. For most people, the first line was the most scary. For me, this one was it. They have arranged the lines in such a way that you can’t decide to jump ship after the second line. Walking back to the hotel will take over two hours and you’ll be walking in a forest with animals. That prospect is not any enticing. This sees most people just continue despite the fears. We now walked through a very steep hill to get to the third line. The 5 minutes walk revealed to me how deeply unfit I am. I should hit the gym soon.

3rd line- Highest, fastest and ultimately more fun
For the third line, they instructed us that it would be faster thus we needed to brake at the end. I let go on this one. I was relaxed and enjoyed the view of farms, cows, the trees and hills and valleys beyond. I enjoyed this one the most. And the fact that it was fast gave it extra points. It reminds me that life truly happens when you let go of your fears and just be.

4rth line- Cool and slowest.
If I could describe this one I could say it was cool,calm and collected. There were no trees so the ground below with its lush grass was visible. Finally I had gotten the hang of it. I enjoyed watching the river below zig zag past the rocks as my mind just relaxed. Despite threats of getting stuck, we all arrived to the end point as a result of everyone maintaining a good posture for maximum speed. At this point, drops of rainfall were falling on us, but that bothered no one.

5th line- Very good scenery
At this point, my focus had changed from the zip line to the canopies around me. The fifth line is situated in a such a place that you can see more of the surrounding landscape, despite it not being the tallest. Kereita seems like the place I would love to retire at. The only noise is made by the zip lines and mooing of the cows. Besides one or two old men we spotted, its a very ‘isolated’ place in a good way. I wondered how the residents of this place took this intrusion that brought ‘life’ or made their place happen as young people would say. Obviously by now, we were all pros at zip lining(insert wink).

Overally, that was a once in a lifetime event. I’m glad I went.
Out of 10 I would give zip lining a 7.5 for an outstanding experience of its kind. Thumbs up for the flying in the air. Thumbs down for having to get stuck, I feel as if there is something technical they can do to prevent all the frequent experience of people getting stuck. Weirdly enough I don’t think I would want to experience it again. I don’t think I would enjoy it next time since I wouldn’t be scared of flying without wings anymore.

For Stejos Tours and Safari’s, I would grade them at 7. Thumbs up for Steve being a good tour operator. And for Stejos being a reputable agency, they gave us what we paid for. We found some people who had paid good money only to be told they’ll only go for 2 lines instead of 6 or at least 4. Thumbs down, for me being an introvert and for going with a group that knew each other quite well. That made me feel left out for most of the part. Not that I blame the agency.

For all those with bungee jumping, hot air balloon ride, sky diving and white water rafting in their bucket list, you should definitely do this. I promise it will be worth the effort.